Starting From The High 400's

Straddling the Yonge-Eglinton corridor and midtown Toronto’s highly desirable Mount Pleasant East district, Cardiff Condos will add further value to what has long been one of the city’s trendiest and most popular neighbourhoods. The area has a high concentration of urban professionals, and has evolved to include a diverse and acclaimed selection of restaurants along with excellent shopping and nightlife options.

The Yonge Eglinton Centre is the area’s marquee retail establishment. It houses dozens of shops and boutiques along with a multiplex cinema, medical and professional offices, eateries, drugstores, and a well-stocked LCBO outlet.

The Yonge Eglinton Centre also offers direct access to the Eglington station on the Yonge branch of the TTC subway’s Line 1. Eglington Avenue is also well-served by bus lines, contributing to a solid 78/100 Transit Score. The proposed site at 492 Eglinton Avenue East also has an impressive 87/100 Walk Score, which means that practically all your day-to-day necessities can be found within easy walking distance.

Downtown Toronto is reachable in about 15 minutes on the subway, and the Eglinton Crosstown Line light rapid transit (LRT) line is currently under construction. Once completed, the Eglinton Crosstown LRT will add another dynamic, high-speed transportation option that will give the neighbourhood’s Transit Score a big boost. For drivers, the Allen Road feeder expressway to Highway 401 is reachable in a matter of minutes.

Yonge and Eglinton is one of the city’s most in-demand locations for good reason. If you’ve been thinking about making a move to the area, 492 Eglinton Avenue East Condos represents an excellent opportunity to join an intimate and exclusive residential community.

The mid-rise condominiums will be accessible off Cardiff with a ground floor lobby while residential units will be located on floors two through 12. The development is expected to offer a variety of layouts ranging from one -bedroom to three-bedroom plus den. The stacked townhomes will each include two bedrooms and be either one or two floors, ranging from 925 square feet to 1,140. Thirteen units will have terraces, and all the others will feature balconies.

The Cardiff On Eglinton project will include a 452 square-foot entertainment room on the building’s top floor, connecting with a 387-square-foot outdoor terrace overlooking Eglinton. The ground floor will include additional interior amenity space, as well as a 1,000-suare-foot courtyard backing on the townhome portion, featuring outdoor dining alcoves, barbecues, shrubs and trees. 82 vehicle spaces and 114 bicycle spaces are proposed for two levels of underground parking.

RAW Design is in charge of architecture for this development, so we can expect a contemporary and thoughtful building that adds to the neighbourhood’s public realm. 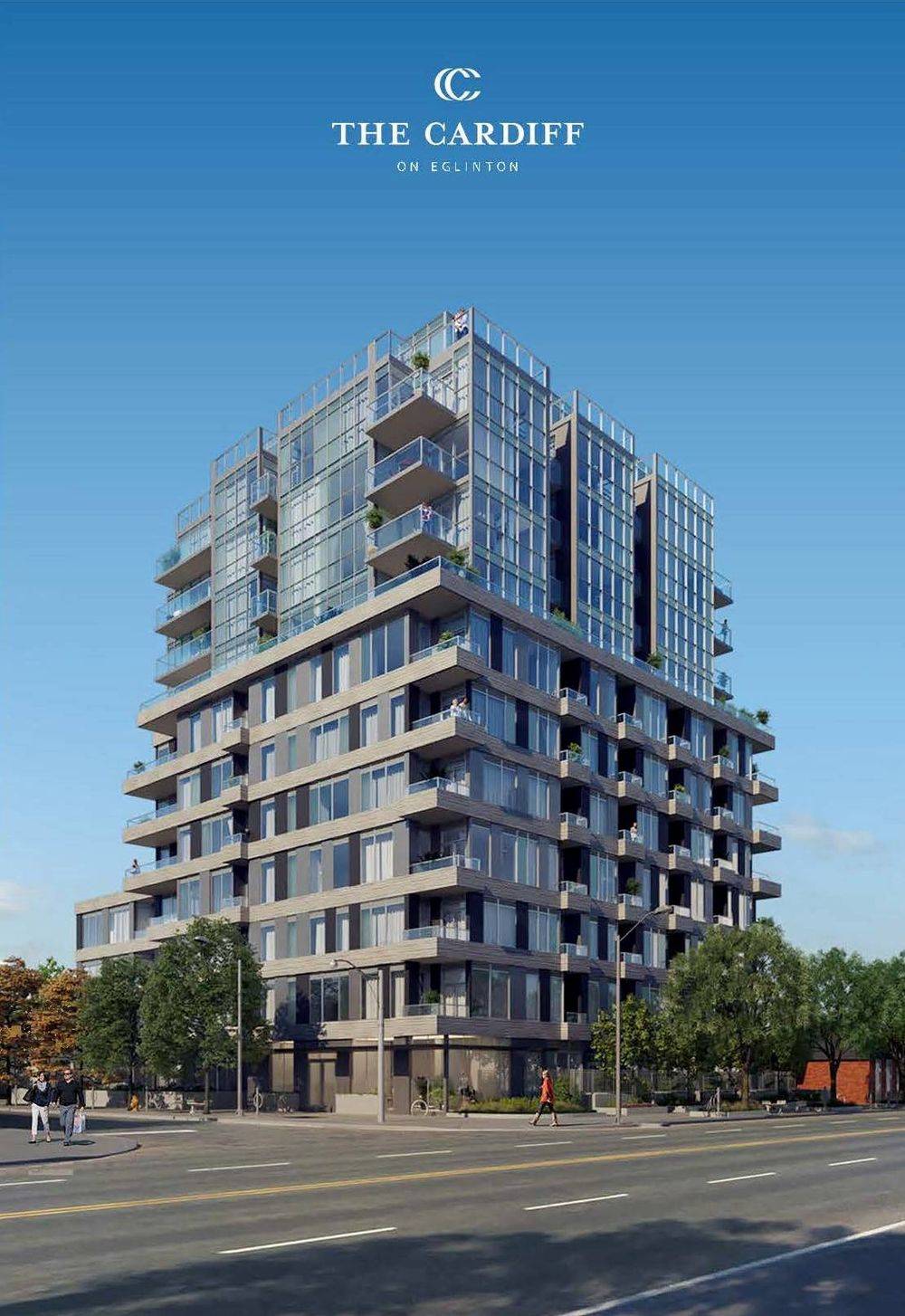 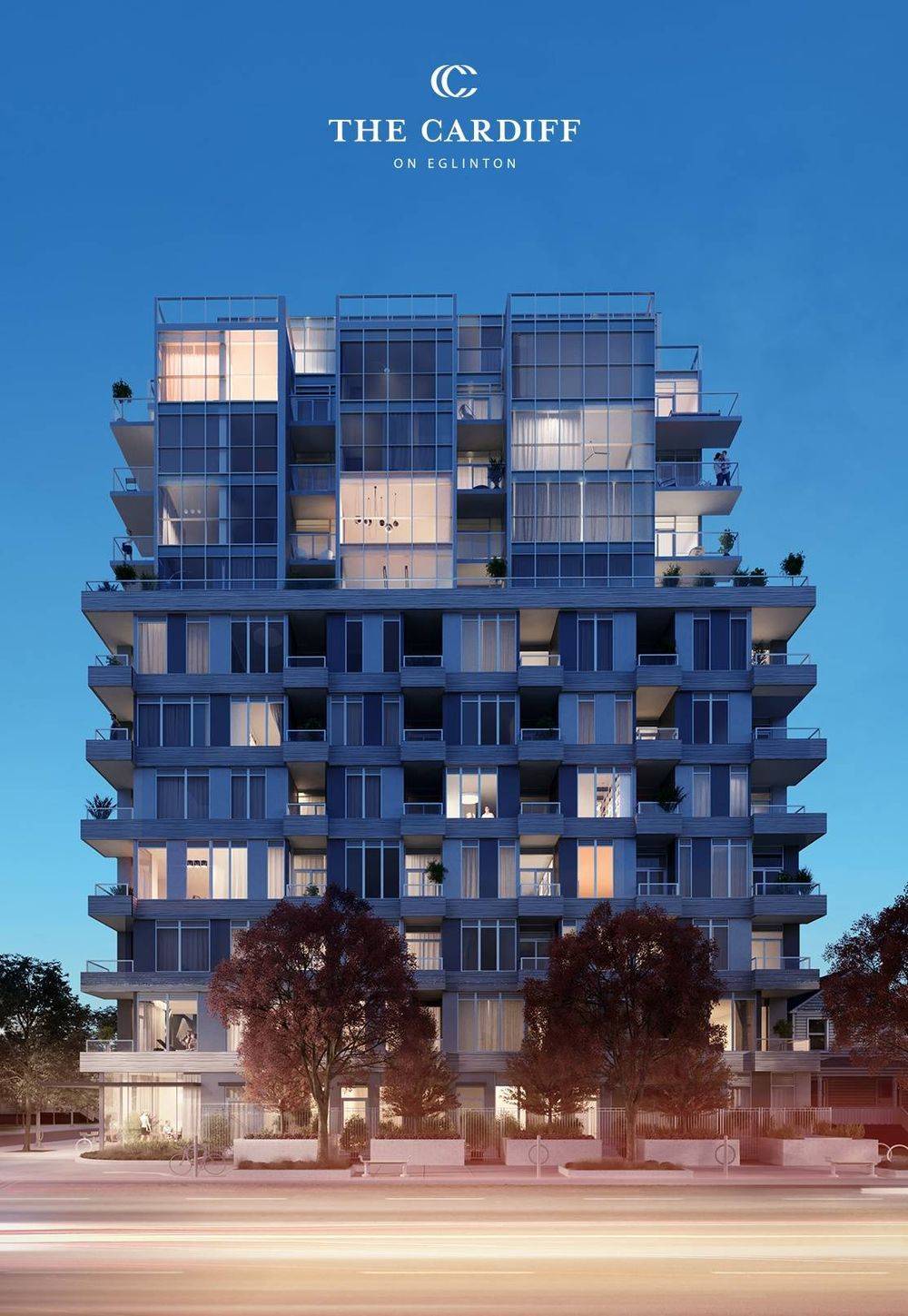 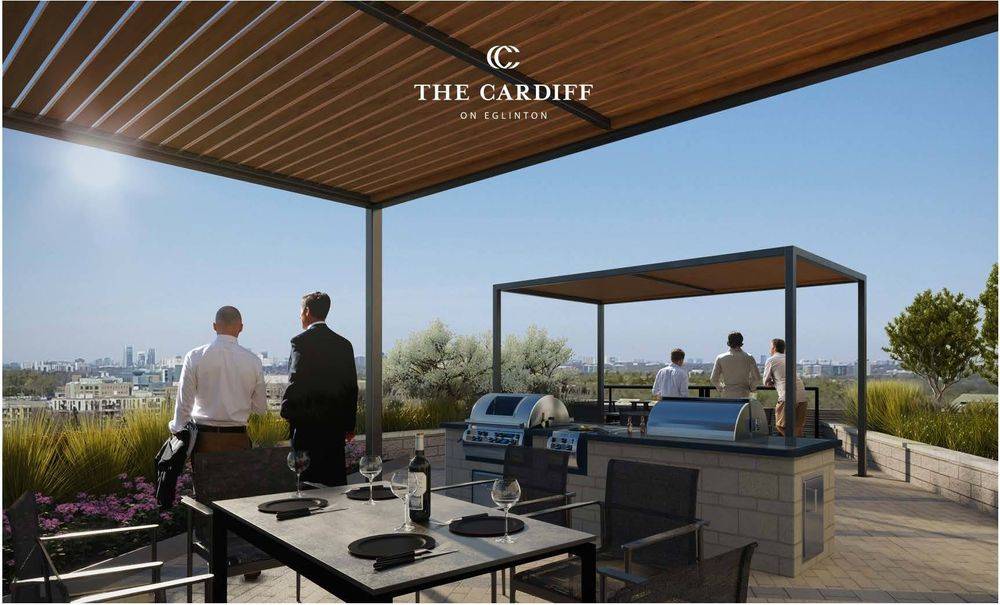 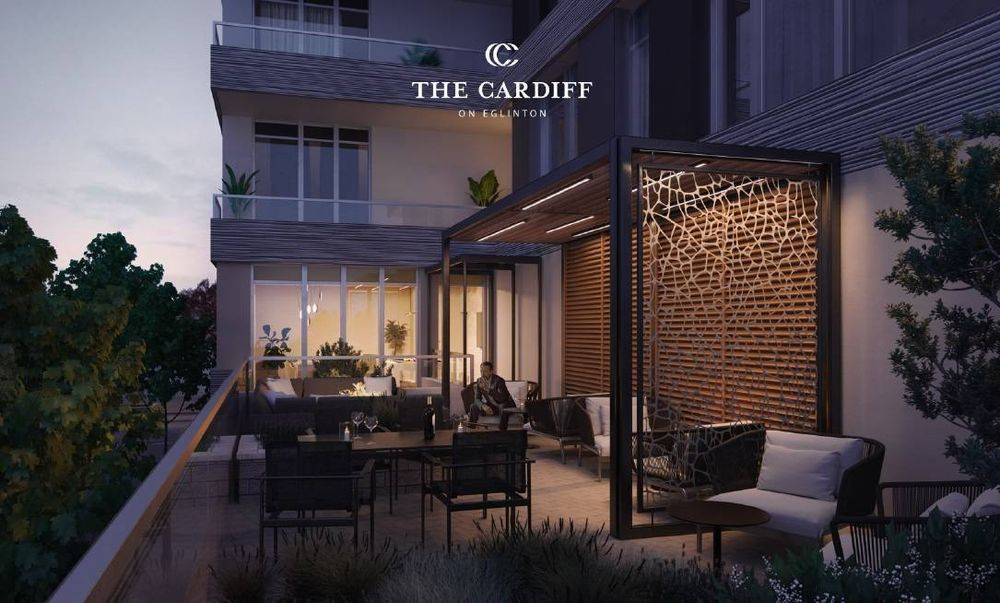 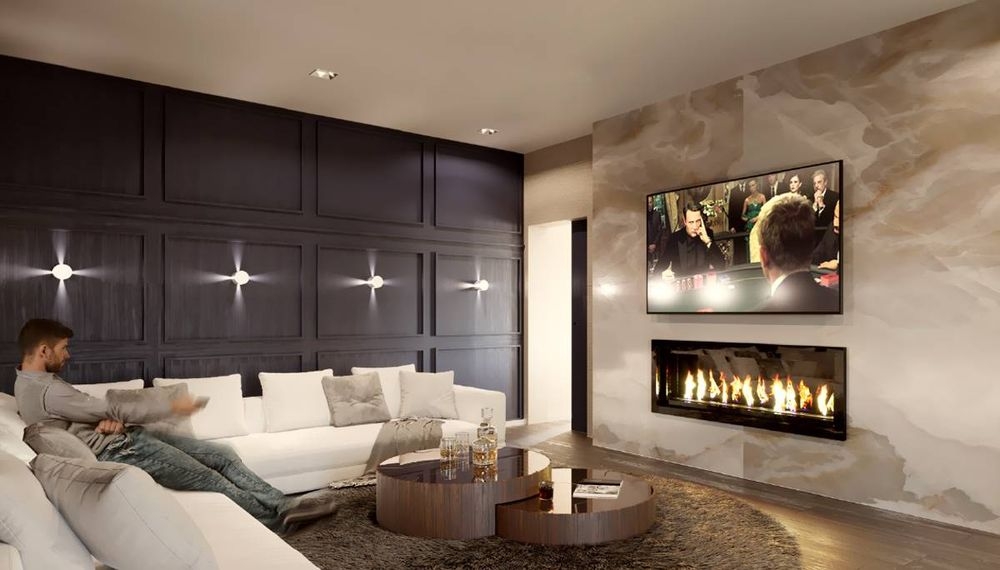 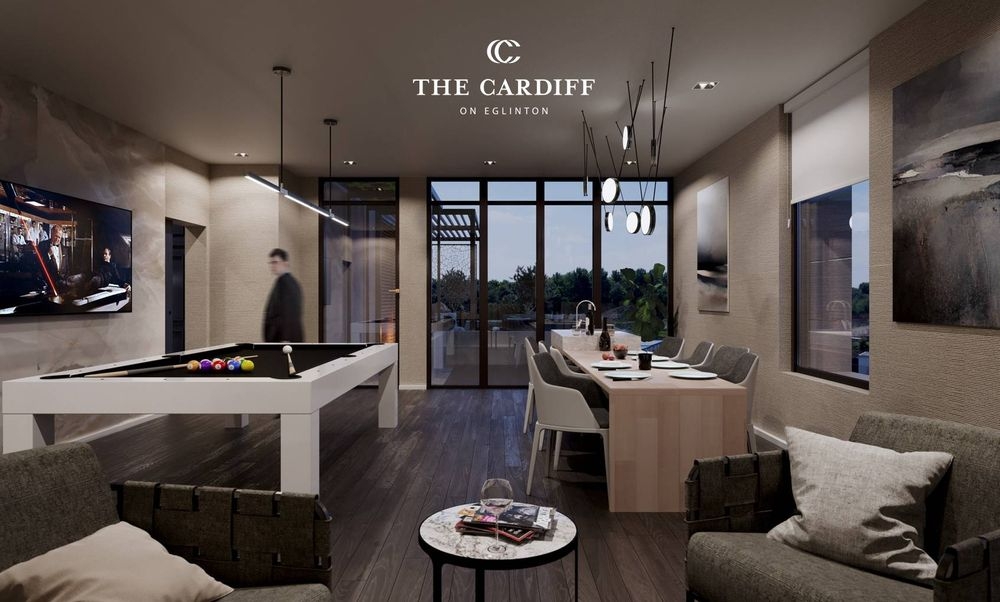 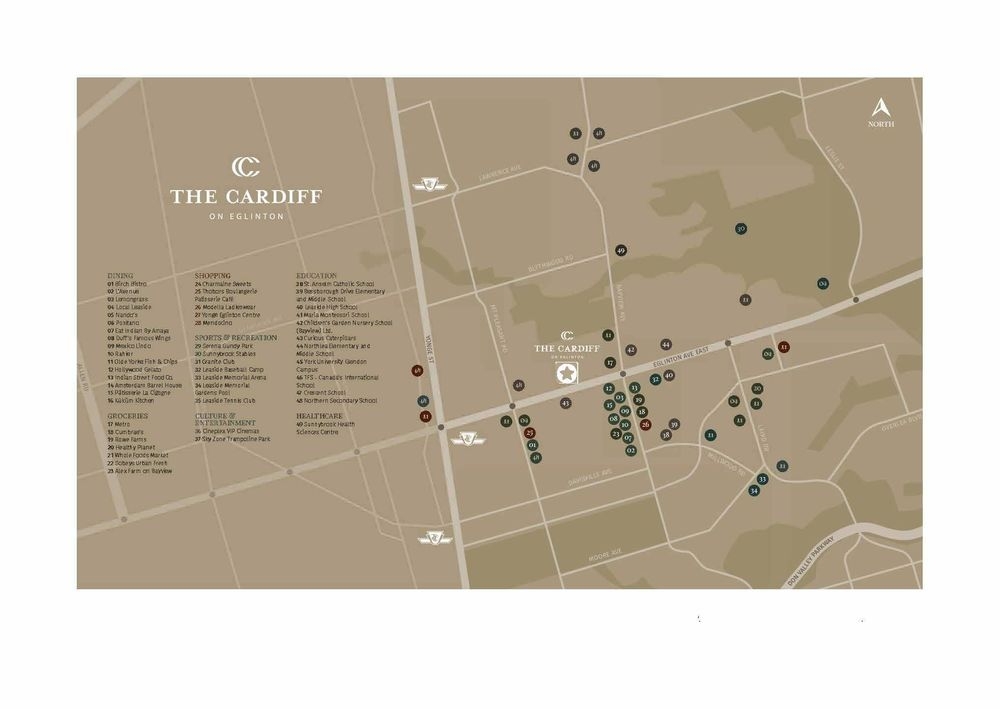 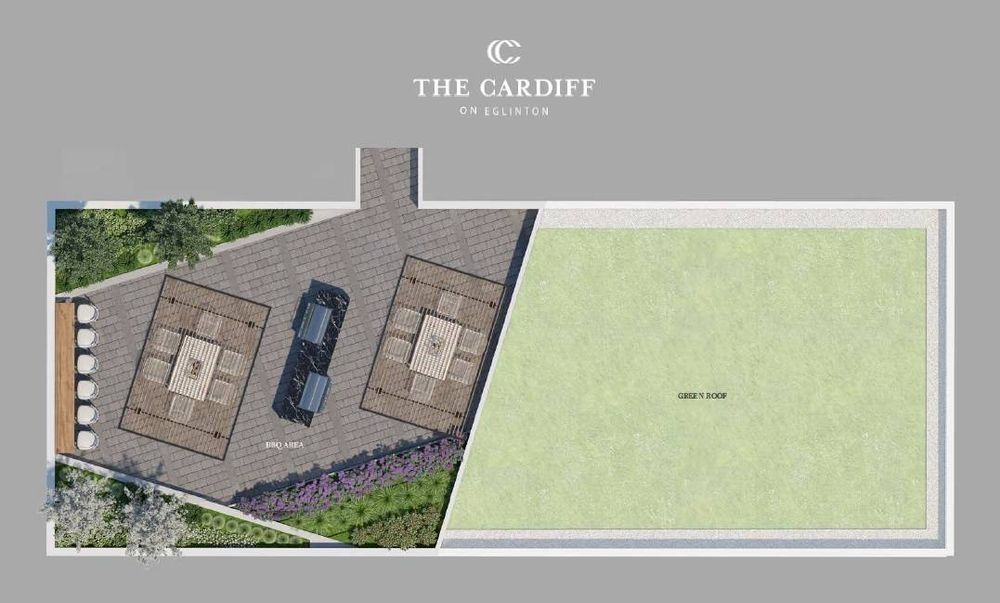 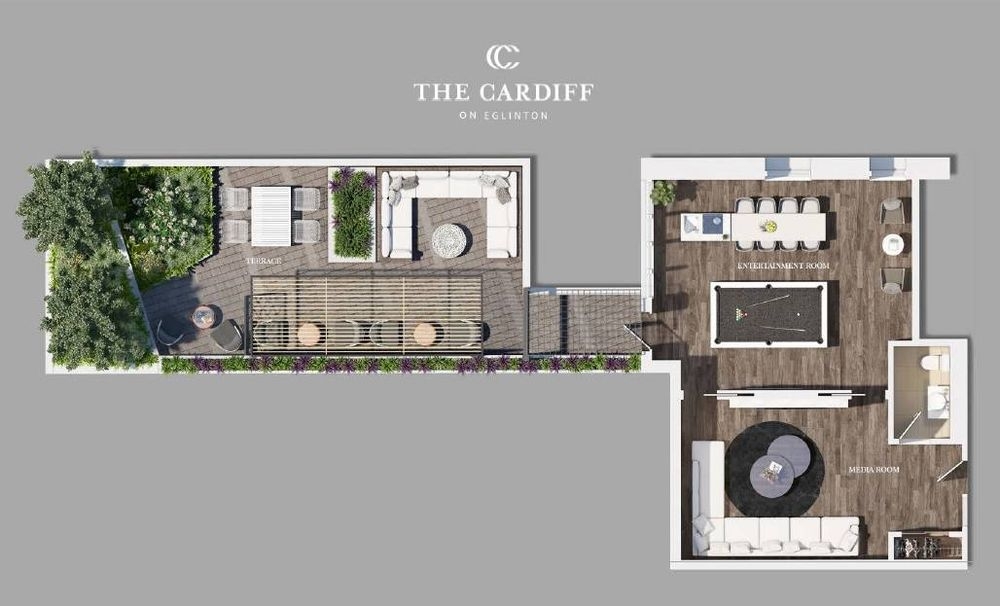 The Yonge and Eglinton area is probably one of the most exciting neighbourhood redevelopments in Toronto. The city itself has recognized this, designating the area as an “urban growth centre,” meaning it’s seen significant growth over the past few years and is poised for even more.

As the number of modern condominium and office towers near the intersection has rapidly increased, so too has the feel of the neighbourhood. What was once considered the edge of the city now has a distinctly urban feel comparable to downtown. Cosmopolitan shops, services and world-class restaurants now line the stretch and a multi-million-dollar commercial redevelopment currently under construction will only add to the area’s transformation.

One perk that makes this an optimal area for investment is the forthcoming Eglinton crosstown LRT, scheduled to be operating in approximately 2020. Once up and running, Yonge and Eglinton will be one of the only intersections in Toronto to have rapid transit access in all four directions. As it stands, from the Eglinton subway station, it’s a fifteen-minute commute into the heart of downtown Toronto. The LRT will increase connectivity even more and encourage a seamless commute. This is especially beneficial, as studies show the modern tenant prefers to walk or use public transit to get to work.

This is a popular and vibrant metropolis that attracts some of the city’s top tenants, young professionals and growing families. Judging by the number of condominiums and mixed-use buildings either under construction or in the proposal stage, the trend isn’t slowing down anytime soon.

Currently in the pre-construction phase, The Cardiff Condos on Eglinton are set to replace a collection of detached and semi-detached homes currently occupying the community’s future site. Pre-registration is open now, so if you’ve been thinking about buying or investing in a residential unit in a proven midtown real estate market, now is a great chance to become part of the Cardiff Condo community.

The original design for the The Cardiff Condominiums includes a mid-rise condominium complex:

The mid-rise will front onto both Eglinton and Cardiff Road. The final number of suites has not yet been finalized, but is expected to have a full range of floorplan configurations. The mid-rise component will house:

This new project is an 12-storey condominium development in the pre-construction phase, proposed by Sierra Building Group for the Yonge and Eglinton neighbourhood. The Cardiff On Eglinton is scheduled for occupancy in 2020.

The site for this proposal sits at 492 Eglinton Avenue East, on the northeast corner of Eglinton Avenue and Cardiff Rd between Mt. Pleasant and Bayview. Sierra’s proposal calls for an 12-storey mid-rise. In total, the development proposes 92 units. The mid-rise is proposed to front onto Eglinton Avenue East with three light-filled retail units at grade. 12 units within the four-storey stacked townhomes will front onto the somewhat quieter Cardiff Road.

The Sierra Building Group has been developing character-rich communities throughout the GTA for over 25 years. From executive townhomes to ornate single-family houses and boutique condominiums, they specialize in buildings that harmonize with their surroundings and enhance their streetscapes. This project represents their first foray into Midtown Toronto and we’re excited to see how they bring their talent for building distinctive homes to their latest condominium project.

RAW Design is a world-renowned mid-sized architecture and design firm known for its innovative solutions to real-world challenges. Valuing creativity above all else, the RAW Design team prioritizes a hands-on relationship with its clients, working closely with them to achieve incredible results without straining available resources.

In designing residential communities, the architects at RAW Design favour a site-specific approach, and aim for successful integration of the finished product within its host neighbourhood.

In 2009, RAW Designed was named Best Emerging Practice by the Ontario Association of Architects (OAA). The Toronto-based company also maintains partnerships with associated firms in Abu Dhabi, Mumbai, and Delhi, giving it a global flavour and helping it stay abreast of international design trends.

The combined talents and industry expertise of the professionals at RAW Design and the Sierra Building Group bode well for the future success of CardiffCondos. Both companies are looking forward to the added prestige this soon-to-be-completed project will bring to their respective portfolios.